Audi R8 Spyder translate performance, elegance, and top-down driving. Its sleek and cutting-edge performance remain the key features, allowing this sports car to stand out in public; capture the attention from everyone in Downtown Miami/ Brickell area. 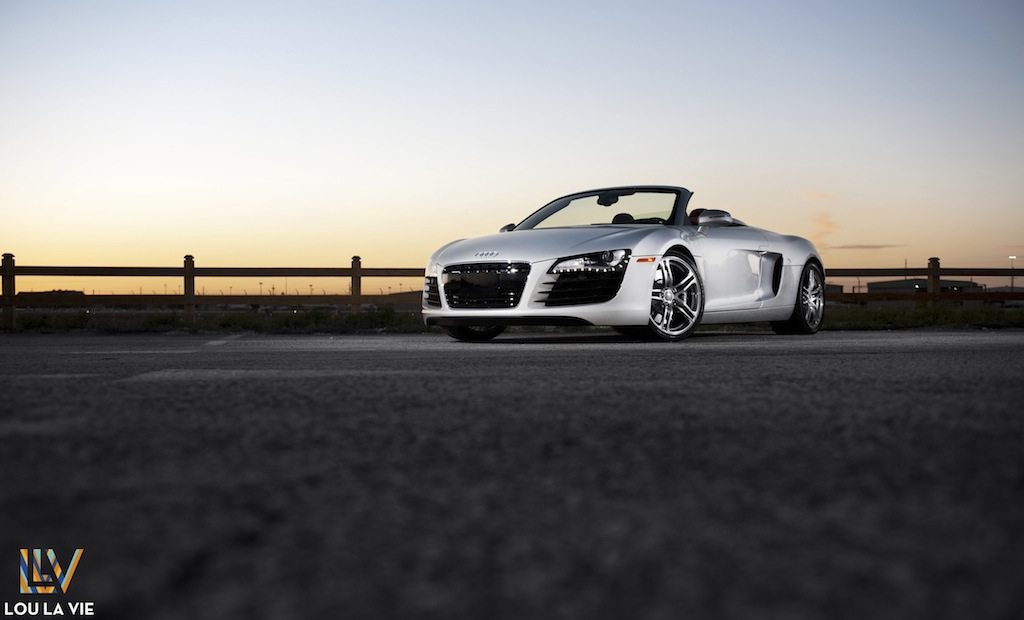 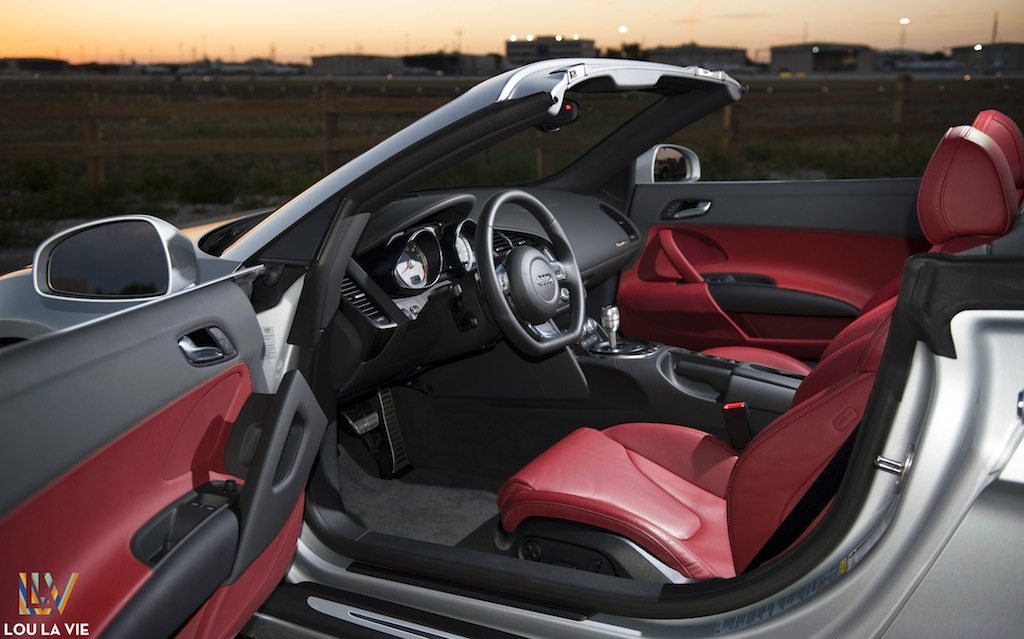 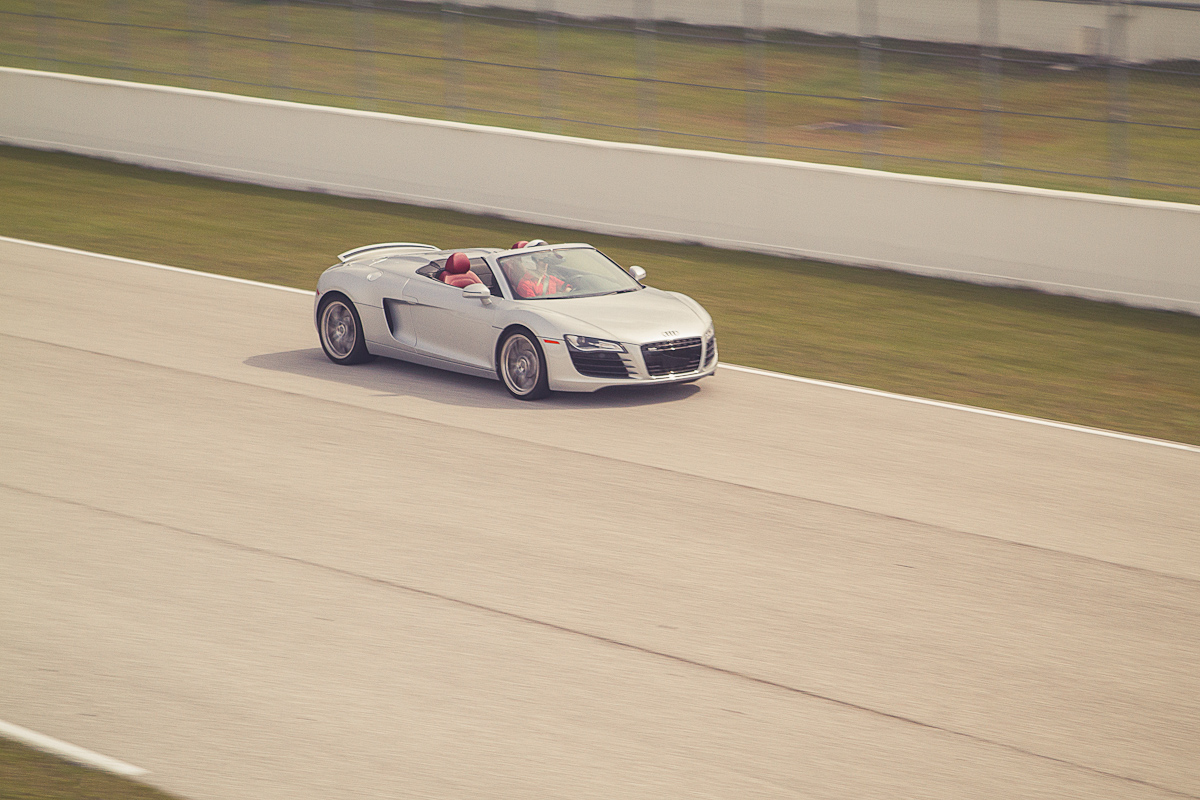 Moviegoers who saw I, Robot will undoubtedly recall the futuristic spaceship car Will Smith sported as his whip in the year 2035. That prototypical exotic ride was none other than the Audi RSQ, a mid-engine concept car developed in the early 2000s by Audi for exclusive use in the blockbuster film. However, it lived a short life as a concept car as engineers rushed the development of a production version based on its sleek lines and ultramodern characteristics. The product of their efforts was the legendary Audi R8. Sporting bold design cues, brilliant engineering, superb handling, and open-air accessibility via the Spyder option, the Audi R8 has received endless praise from automotive critics and Audi fans alike since its debut in 2007. “Car of the Year” awards piled up faster than the speeding tickets when driving our Lamborghini Gallardo rental from publications such as Fifth Gear, Automobile Magazine, European Car Magazine, Autobild, and Playboy. Many hailed it as the first car to trump the Porsche 997, widely regarded as one of the greatest sports cars ever made.

“So what?” you may be asking yourself. “Who cares if every pompous, narcissistic auto blogger fell over themselves for a chance to get behind the wheel of an Audi?” “What does Audi know about making supercars?” Apparently, everything.

What to know when you rent an Audi R8

Hop in the cockpit of our Audi R8 Spyder and you’ll start to understand why exotic car enthusiasts foam at the mouth when graced by this car’s presence. Long, curvaceous body panels, aggressive shark-like fins, and anodized black air vents envelop the car and clearly break away from the two dimensional geometric lines of exotic car counterparts like Lamborghini.

This car is a dream to drive – a deity among scores of supercars that feel awfully inconvenient for daily endeavors. 430 horses remain perpetually poised behind you yet never interrupt a pleasant driving experience… that is, until your right trigger foot gets antsy. That’s when this chariot snaps into action: the growling engine roars to life, the revs climb on command, and Audi’s Quattro all-wheel agility and dynamic suspension work harmoniously to corner turns with a smoothness that would put 50-year-old single malt Macallan scotch to shame.

Speaking of roar, the auditory experience provided by the base model’s angry, guttural V8 will sound much truer to supercar form than Audi’s upgraded, melodious 5.2 liter V10 note. Yeah, I said it. It’s a signature sound that both delights you and terrifies other drivers at full throttle, a skill the V10 version never mastered. Interestingly enough – and this is for my engine audiophiles – your first instinct to drop the top and let ’er rip may be misguided. Dropping the top certainly adds an insatiable allure to the experience, but at top speeds the mechanical orchestra gets lost in open sky. Instead, take advantage of the ingeniously designed electric rear window – it’s like standing front row at the greatest concert of your life, minus the shirtless sweaty hippies screaming behind you.

Get the latest news & special offers from Lou Lavie

Sign-up now and get 5% off your next car rental order! 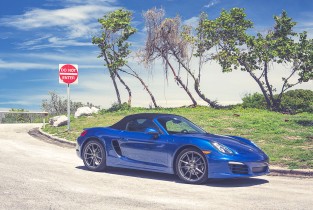 THANK YOU, SOMEONE WILL BE IN TOUCH WITH YOU SOON.

In the meantime, why not like or follow us and stay up-to-date with new cars and news about Lou La Vie!